As some readers may know, my wife and I are moving to a new, much nicer, place in early January. This means there’s lots to do in a limited timeframe. I did get the end of Christmas day and much of the day afterward to spend how I saw fit, however – and much of that was spent in Vanguard.

There’s a bit of a spat on the official Vanguard boards about Randolph the Reindeer, the free flying mount available to all players as part of Vanguard’s holiday content. Some players feel that this makes Vanguard “too easy.” In this case I think there’s some substance to what I would ordinarily dismiss as whining, since it comes from the same bunch who natter endlessly about any change that doesn’t add lots of mindless drudgery to the play experience, or removes drudgery that’s already there. 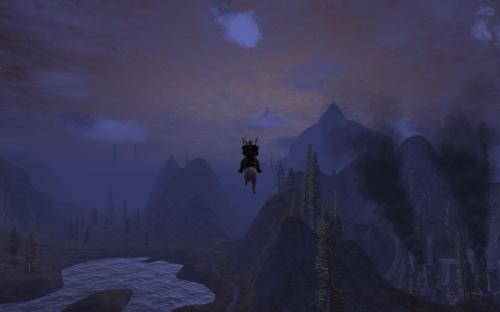 The fact is that having a flying mount available for low and mid level content changes the play experience dramatically, and speeds leveling almost as dramatically by greatly reducing travel time. But the fact is also that the flying mount is temporary, so any real damage it causes to the game will be short-lived. And frankly, I wouldn’t have traded the experience of flying for anything – and not because it’s helped me gain 4 levels in two days – I’d have done okay without it, putting 14+ hours into solid questing, instead of taking probably a third of that time to fly around gathering Riftway unlocks and seeing the sights. There are some really striking visuals in Vanguard, and this has been the great joy in having a flying mount for me. (It’s also good for the readers of this blog, since I get to post the screenshots.) But I think Vanguard is a game in which it’s best to take your time exploring the content and the world of Telon, and wherein the player is not best served by rushing to the level cap. This is why I think the bonus XP weekends that SOE occasionally throws out are not in the long-term best interests of the game, especially given the shortage of level-cap content.

Now, to the play itself. On Saturday and Sunday I got in three sessions of about 90 minutes each, with no crashes or major difficulties, although there’s a weird problem where timers and vendor/questgiver windows don’t show up. I solved this by logging out and getting back in (it only hapenned in outposts,) but I think there’s probably a command along the lines of /endloot that I could also use to solve it. The chat server remains buggy, although it wasn’t as big a problem this time around. 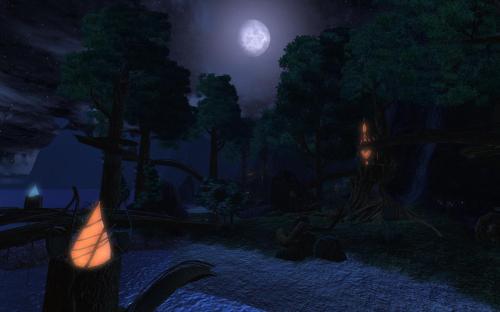 I did finish (more or less) the questing in the Vault of Heroes area, but was still 13th level by the end of play on Sunday night. Monday and much of Tuesday were taken up by family holiday business. After all that was finished I signed in for a solid 6 hours. At one point I was talking to my guildies in chat about how improved client stability seemed, and literally as soon as I hit Enter to send that statement, I crashed to desktop. So it seems that while the Vanguard client is not yet 100% stable, it’s certainly much better than it was just two months ago. I did have a system lock earlier tonight, but I’m not sure that was caused by Vanguard. Note that a) I am running at really high settings for the most part; and b) I have hardly used /flush at all.

I did a pretty extensive amount of questing, including the Dark Roots questline out of Veskal’s Exchange, which netted me a weapon nicer than what I’d been using, and did a fair bit of flying around, making sure I got at least some of the Kojan and Qalia Riftway locations unlocked, and literally stopping to gawk open-mouthed at Tawar Galan at night. I doubt I’ll get all the locations unlocked by the time the flying mount gets pulled, even on Thestra, but I have enough now, and I’d rather focus on leveling in Adventuring. I also dropped into Arlinora’s Retreat, south of Veskal’s Exchange, to pursue one of the United Races of Thestra questlines. I am really enjoying these “mini-epic” quest sequences, and plan to do more of them. And yes, some parts of them are damn challenging.

Like I said, I’m focusing on Adventuring for the time being, and I certainly have no complaints regarding progress – since I resubscribed, I’ve gone from 11th level to 17th, putting me within reach of half the level cap. The bigger prize, though, is getting to see much more of Telon, including some areas outside the starting zones, and pursuing the “mini-epics,” which is where I think the meat of Vanguard really is. I fully intend to pick up Crafting and Diplomacy again as well, but I think I’m secretly hoping they make some substantive fixes to Crafting before I get back to it, and integrate Diplomacy better into the rest of the content. Plus I want to be able to do stuff with my guild, all of whom were ten to twenty levels above me when I rejoined. At this point I’m looking at doing the two United Races of Thestra questlines out of Renton Keep, and then hopefully being of a level appropriate for Coterie Infineum Sanctuary in Qalia.

For the next week or so, though, I plan to play as much as I can, but that probably won’t amount to more than an hour or so a day – if I’m lucky. After that, I will probably be offline entirely for a week or so while we get settled into the new place and get internet access arranged.

3 responses to “Flying, Leveling and Sightseeing”