Around this time each summer I tend to go through a number of ancient and medieval films, usually from a short list of movies that I’ve seen many times before. One of my favorites is the 1999 film The 13th Warrior, based on Michael Crichton’s 1976 novel Eaters of the Dead. The premise of the story is interesting: using the fragmentary text of Ahmad ibn Fadlan‘s journey among the Volga Rus in 922 AD, Crichton filled in the gaps in the historical account with what we’re intended to take as the real historical story that inspired the Anglo-Saxon epic Beowulf, with a tribe of remnant Neanderthals thrown in for good measure. Crichton’s in-character afterword has fooled many into thinking that a real manuscript containing the events of the novel was indeed unearthed, and it’s actually pretty convincing, but the throwaway reference to Alhazared’s Necronomicon should give the joke away. 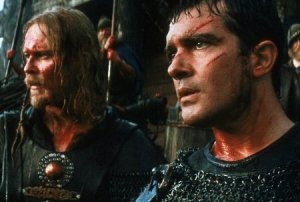 The 13th Warrior became infamous during production for interminable delays, cost overruns and for the power struggle between credited director John McTiernan and author Michael Crichton. When Crichton came out on top the edits and reshoots resulted in a different, more action-oriented film than what McTiernan had planned. In many places you can see the stitching in the final film, in an introduction that sets up the film in seconds where clearly more was filmed, and in story elements introduced and then dropped without fanfare. I have to assume there is considerable additional footage available for a director’s cut, but the politics of the situation would seem to make one unlikely — and more’s the pity, because in many cases even the scraps are engaging. The thirteen warriors manage to be memorable and distinct even though some of them don’t even have dialogue. A would-be king is cut down by Buliwyf without even a mention early in the film, and the machinations of the scheming prince Wiglaf result in an unforgettable duel (often described by commentators as a holmgang, although this is questionable,) between the voluble Herger and Wiglaf’s lackey Angus before the whole plotline is shuffled off to the cutting room floor.

For the armchair historian, the film has both virtues and flaws. The costuming is skillful from the standpoint of pure craftsmanship but does not reflect anything about what we know about Norse clothing (2005’s otherwise excreable Beowulf & Grendel does a much better job in this respect,) and the weaponry is suspect — it’s mostly oversized, which is something typical of Hollywood productions, and they are weirdly rough as if they were made by Orcs. But at least an effort was made to get the hilts and pommels right. The armor, on the other hand, is highly problematic, a mix of types from all over the historical spectrum from ancient Roman gladiator kit to Spanish morions that would have fit nicely on a conquistador five centuries later than the film is set. You can see what the filmmakers were going for: the impression that the armor was looted stuff from all over the place, but for a viewer who has an eye for this kind of thing it can be jarring, especially in a story that’s an attempt to paint a more realistic and plausibly historical picture of Beowulf.

On the other hand, the film’s Vikings feel right. There’s the warrior ethos, the doomy fatalism, the invocations to the All-Father and the exceptionally memorable death-chant, used early in the film during the Volga king’s funeral and again at the climax:

This latter scene is the terminus of Ibn Fadlan’s journey in the film, even coming as it does before the climactic battle. The cultured and educated Muslim from what was at that point in history the world’s highest and most learned civilization, who sees the northmen at first as filthy barbarians, has found in their comraderie and fellowship, in bleeding and fighting alongside them, that their pagan, alien world has its own virtues and worth, without neccessarily eroding his own faith in so discovering. So before the final confrontation with the Wendol he prays to Allah in the manner of Islam before joining the Northmen in their prayer, in one of the film’s most powerful scenes.

A soundtrack for the film was recorded by Graeme Revell that featured Lisa Gerrard of Dead Can Dance (and who would later feature memorably on Hans Zimmer’s Gladiator soundtrack.) But Crichton disliked it, so he ditched in in favor of hiring longtime collaborator Jerry Goldsmith. This move proved wise; Revell’s score was good by all accounts, but Goldsmith’s proved to be one of the most remarkable film scores in recent history, evocative of both of the film’s cultures and bombastic in the best possible way. The penultimate track, “Valhalla/Viking Victory” is so good that Ridley Scott used it in a similarly climactic scene in Kingdom of Heaven, virtually ruining it for anyone familiar with the score of The 13th Warrior.

The 13th Warrior is deeply flawed as a film, and one can readily see why it didn’t do well with audiences, but has made a lasting impression on re-creationists, those interested in the Viking age and ethos and fans of film soundtracks. At its best it’s a muscular drama about the twin brotherhoods of arms and adversity; at its worst it is a choppy action piece with sloppy costuming, a plot roughly hewn from history and literature, often murky battle scenes and sound work that leaves some of the dialogue unintelligible. Its very schizophrenia has a certain charm that manages to make it more engaging as a rendition of an episode almost lost to history, rather than less.