I first encountered Hârn as many did, through its memorable ads in old issues of Dragon and in gazing at issues of Encyclopedia Harnica on the shelves of the not-so-local game store. At the tender age of 13 or 14 I didn’t know what to make of those at the time, and I’m sure lots of other folks didn’t either.

I was really introduced to Hârn years later when I started playing Rolemaster in the early 90s. I’d gone over to the GM’s place to talk about his campaign, and Hârn was where it was set. The maps, details and color heraldry he showed me blew me away. Within a couple of years I had my own collection of Hârn materials and set out running my own campaigns in the setting. 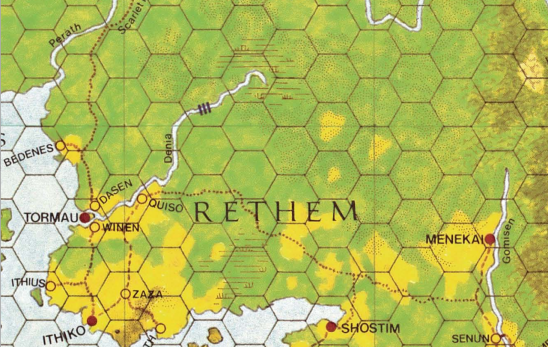 Published as a boxed set in 1983 by Columbia Games and originally authored by N. Robin Crossby, Hârn flowered over the next several years into one of the best-developed settings in the history of RPGs, and so it remains today. Not only because it’s a great setting exquisitely tailored to serve as a platform for roleplaying games, but because the maps and organization are second to none.

There’s a lot of supplementary material, but I’ll always recommend that folks start with the basic Hârn set, now titled HârnWorld, which provides an introduction to the whole world but focuses on the island of Hârn itself. There’s more to the world (a lot more, actually,) but it’s Hârn that is the most thoroughly developed and there’s enough space and detail therein to provide you with gaming for a lifetime. 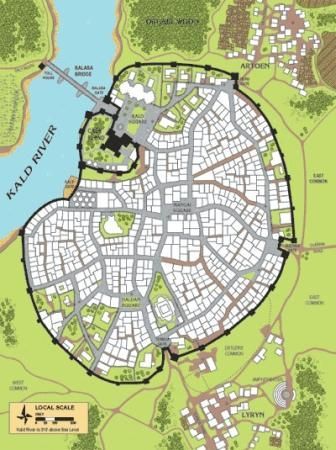 Hârn is a backwater island off the western coast of the Lythian continent, home to seven human nations and four major nonhuman cultures, two of which have kingdoms of their own. Superficially it’s a very low-magic place inspired by early Norman Britain, something that many commenters have noted. But beneath the surface there’s a lot of weirdness, too, much of it in place to justify aspects of traditional RPG play. You can stick to the populated areas and dismiss this as mere rumor and legend — the material is written that way — or you can embrace it and have a campaign that’s as high-magic as you’d want. Basically every style of fantasy gaming is well-supported by the setting.

The “low fantasy” label is accurate, as far as it goes — this is a world with a very Dark Ages feel, and fans of something like Game of Thrones will likely find it very welcoming. But that label is also superficial, since there are also justifications for all of the standard traditional RPG tropes: strange creatures, ancient artifacts, mysterious ruins, clerics with powers that work. It’s all there, and you can choose to dial these up or down depending on the type of campaign you want to run. 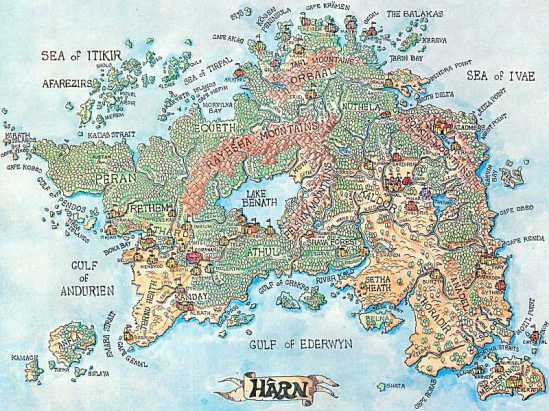 On Hârn there is a place called Araka-Kalai that exists on two different planes. Here the God Ilvir dwells, shaping bizarre creatures as is his whim and setting them loose in the world. Here there are tribes of Gargun — Hârn’s version of Orcs — of several subspecies, brought to Kethira centuries ago by Lothrim the Foulspawner. There is wilderness populated only by barbarians and worse, sites built by an ancient civilization of planar travelers, chantries of Arcane Lore and Orders of Shek-Pvar, powerful but reclusive wizards dedicated to the study of the magical arts.

Hârn has, for all of its history, been system-neutral. Almost none of the materials provide any stats. However, a dedicated system, called HârnMaster, was released in 1986 and continues to receive support. Like the setting it supports many styles of play but it’s fairly complex by RPG standards and its combat is absolutely brutal, so many find it not to their tastes. I may do another piece about HârnMaster in the future, but it’s entirely optional and possibly not the best way to approach the setting. 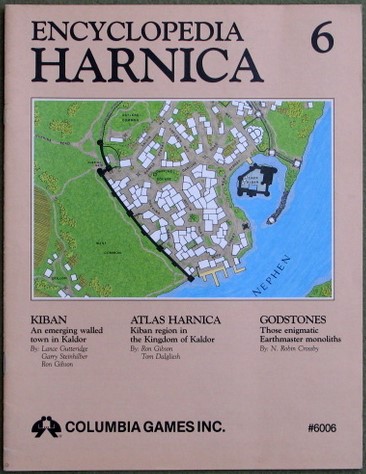 Personally, I’ve played (and run) in Hârn using both Rolemaster and HârnMaster, and have seen it run using RuneQuest, Chivalry & Sorcery and of course multiple flavors of D&D. There’s official conversion material for GURPS. I’ve often thought that Ars Magica would be a great fit if so tailored, and Burning Wheel is a natural out of the box. So basically just pick whatever fantasy game system you like and run with that.

I would be remiss in not mentioning Hârn’s maps, which for all that they date to the early 80s have yet to be surpassed in both beauty and functionality. The regional maps are drawn in a cartographic style and are absolutely packed with information. The local and structure maps are just as useful. Screenshots do not do them justice — they need to be seen in the flesh to be appreciated. The “poetic” maps are actual in-world artifacts that you can hand out to players, giving them a very good idea of general geography but little clue of the dangers they’ll face on a long journey. 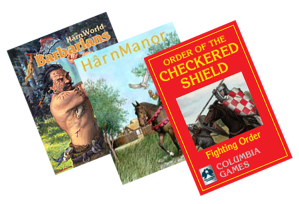 Hârn is still published by Columbia Games, and they have an extensive array of materials available both in print and PDF via DriveThruRPG. A piece of advice, though, that I wouldn’t limit to Hârn: don’t get hung up on the supplements. The basic HârnWorld set gives you tons of info on the setting that’s high-level, but not too high, and is loaded with adventure hooks on virtually every page. You’re unlikely to encounter a situation where your players are more familiar with the setting and have more materials than you do — although I have a hunch that at least some of them will get hooked on the setting and seek out tons of product for it, as I did. Acquire and use this extra stuff as you need it — it won’t come up all at once.

The Hârn materials are organized in an article-based format that’s almost unique in RPGs. Others have tried to do this and have always failed, usually messily; the only other game product line I know of that’s made a looseleaf format work is Advanced Squad Leader. The basic idea is that there’s a core set that provides high-level details on the part of the setting you’re in, and then there’s articles that support that with local information about kingdoms, sites, gods and so on. The site articles are especially valuable, as they contain details on specific structures, NPCs, rumors and local legends that are ripe for use as adventure seeds. The older volumes were bound and intended to be cut apart and punched for insertion into a binder, but more recent products are sold looseleaf, sometimes with binders included — or you can buy them as PDFs and just print them yourself.

I should also mention that the world of Kethira, on which the island of Hârn is located, is also extensively well-developed, especially by the folks at Kelestia.com, founded by Crossby himself before his far too early death. Kelestia publishes exclusively in PDF but have done a lot of material for locations outside Hârn, in particular the vast Venarive region that lies nearby. Hârn also has great web support at Lythia.com, where there’s also a huge library of additional fan-created materials.

Hârn changed the way the I look at fantasy worlds, and I suspect it will do the same for others who haven’t yet been exposed to it.

One response to “The Great RPG Settings: Hârn”